Hey all you tattoo fans! Check out my most awesomest giveaway! Tell me you came here for the tattoo, win a chance at a $100 gift certificate….

My little brother got his first tattoo after his surgery to remove the first cancerous tumor. He was always little rebellious- he had me bleach and perm his hair once. This was the 80’s- hair Bands rocked the day! My parents were totally against his getting a tattoo. They threatened to kick him out or disown him. All the nice things parents say when they don’t want you to do something.

He comes home with his first tattoo- a blue rose with a banner that says “MOM” on one side and “DAD” on the other.
Mom melted.
He sure knew how to play them! After that, he got two more tattoos- a tiger on his leg and the grim reaper on his shoulder. The rose was on his arm. They were beautiful tattoos. When he passed away from his second round of tumors, we dressed him in a tank top so that his tattoos would show at the funeral. He was 25 years old.
My mom and my brother celebrated their birthdays almost two weeks apart in February. Their birthstones were amethyst. That’s why when Beena and I got our tattoos honoring my mom/her grandmother and my brother/her godfather, we requested the cancer ribbon be purple. 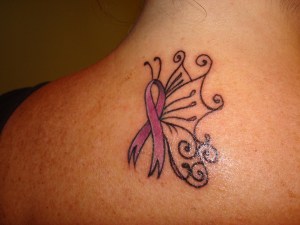 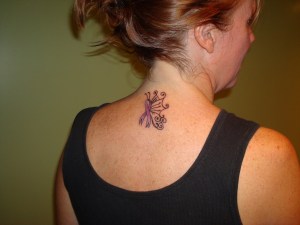 We got them last night at Peter Tat2 in West Hempstead on Hempstead Turnpike. John, the Assistant Manager was very patient with us, being virgins and all. Beena chose her inside leg, right above her ankle and I wanted it on my back because if I look at it too much, I’ll get sad.

Beena went first, shaking like a leaf. She held my hand and sucked her Jolly Rangers (thanks for the tip, Paula!) It hurt, but my big girl didn’t cry! I was so proud of her. I was joking around trying to take her mind off the pain. Halfway through I told her I changed my mind- I wasn’t going to get one. She almost jumped out of the chair to strangle me! Twenty minutes later, she was done, wrapped up in a garbage bag (bandage.) My turn. Gulp!

I’m not going to lie and say it didn’t hurt. It did and it was like no other pain I ever felt. I gave birth to BIG babies, with no drugs, so I figured I had a high tolerance for pain. Getting this tattoo was like having my skin flayed off. Slowly. With a hot, rusty knife. Well, not rusty- you can’t feel rusty, right? I sucked it up and went into my “happy place” (no, Beena, not the hallway, even though the color does make me happy…) While I was concentrating on the wall patterns, I thought to myself that Mom would’ve been proud of us. As I think this thought, a tiny, pointy oval of light flickers onto the wall. Two or three seconds and it blinks out. It wasn’t a reflection from anything- we were in the back room. I thought maybe John had a laser light on his needle machine, but my body and head would’ve blocked any light from behind where he was sitting. So I’ll just take it as my Mom showed up and gave us her approval. I hope we melted her heart in heaven as well.

So bond with your children. If they tell you they want to get a tattoo instead of threatening to throw them out, go with them! lol! Love you, Beena!

One thought on “NaBloPoMo #11- Mama/Daughter Day”