This post was started awhile ago, and I never finished it. I’m planning another hike soon, so I wanted to document our “maiden voyage”- our first hike. So…
Zombiegirl, MR and I went to Bear Mountain for a warm up hike for our trip in July. Zombiegirl packed everything her Aunt Paula, Uncle Ray and cousins gave her for her birthday- backpack, first aid kit, binoculars, flashlight-even her dehydrated ice cream. After culling some unnecessary items from her backpack and packing lunch for everyone, we left.
It’s only about an hour’s drive to Bear Mountain. We stopped at the Visitor’s Center and Bookstore on the Palisades Parkway where I bought a book of information on the NY, NJ, CT and PA section of the Appalachian Trail. I know Z-girl was eyeing that cute stuffed deer…
We got to the Bear Mountain park around 9:30 am, and saved the $7 parking fee because we finally purchased the Empire Pass. It wasn’t very crowded- a big crowd of Chinese people, a few serious looking hikers and a few groups of day-trippers. The parking attendant recommended we go south because that’s the way up the mountain- north followed more of the highway, and would’ve led us to Bear Mountain bridge. After a trip to the bathroom we followed the road on the left side of the BM Inn, which is a beautiful old inn, to the trail.

Almost immediately, it went up. I guess, in my mind, I never thought about the ramifications of “mountain.” You have to go up. 1305 feet up. And this was my first hike. My first thought was to stop and tell them I made a mistake. Then Beena called. And talking to her I was a little proud to say I was hiking. So I went on. And it got worse. We hiked behind two 20-somethings- one in Converse sneaks and the other in Coach sneakers. I wondered how long they would last. We leapfrogged with them for awhile on the AT (white blaze)/Suffern Bear Mountain (yellow) trail. On our ascent, we met a group of by scouts with their adult leaders- about 30 of them in full camping gear. I asked if they were BS, and when they replied yes, I asked if they would carry an old lady up the mountain, meaning me. Because by this time, I’m puffing like a locomotive. It sounded like I smoked a pack a day, which I don’t! I am so out of shape!

A little further up, Z-girl ducked behind a rock to change into shorts. The trail eventually leveled out and passed through a pretty glade where MR tried to find a walking stick. The BS troop passed us by because at this point, I’m stopping alot to catch my breath and slow my heart rate. We put on sunscreen and bug cream from Z-girl’s first aid kit (that thing has everything!) and continued on. A little further up, we cross a road- I think it’s 9W. It’s then that we realize that we were on only the yellow SBM. We missed the “turnoff” for the AT. I remembered reading though, that a hiker did the same thing, and was able to connect further on with the AT, so we kept going. It was a nice descent into a little valley, where we had to cross a stream and came up on a flat lane. Okay, this was nice, I thought, I could do this all day. This lane opened up into a meadow, where MR found a sign that said “Doodletown.” I had read that Doodletown was a deserted town, with most of the homeowners moving away after Bear Mountain State Park started buying properties to expand. We didn’t hike Doodletown (mainly because we couldn’t understand the sign) so we continued on to a little meadow, where we met two hikers and their cute dogs in hiking boots! We stopped them to ask if we were going the right way. They confirmed that we could pick up the AT if we kept on going. So we did.

About a mile down the trail, we found a rock outcropping where we stopped for lunch. After lunch we continued down the hill and came to a T in the trail. Do we go left or right? We couldn’t find any markings except the red which we didn’t want. After a brief disagreement, we decided to backtrack. When we got back to Doodletown, we noticed the Boy Scout troop setting up lunch in the meadow. Making a quick left to avoid the troop, we ended up on the 1777W trail, which was really easy- a level, wide walking trail without too many rocks. After about 20 minutes on that trail (I’m not really good at distances- go figure) we came to another fork. We found the AT! I, of course, chose the wrong way. We asked someone we met on the trail how to get to the summit, and he turned us around. Finally! On our way, after about 8 miles out of our way.

At this time I want to turn back. It’s all uphill from here. Ahead of us is practically straight up. We’ve reached the mountain. For the next hour, we climbed over rock outcroppings, twisted and turned up the trail and stumbled up the mountain, worrying that all this exertion is going to use up all our water. We finally came to a flat part- the highway.
I really need to figure out my distances. It felt like we were on the road for miles. Precariously close to the edge of a 100′ precipice. With cars zooming by. This was not my favorite part of the trail. I was glad to finally leave the road and it’s white blazed boulders. 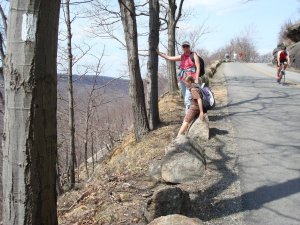 The next part of the trail is the most “traily” part of the Bear Mountain AT. More rock outcroppings, dense forest, more “up”. It’s here that I start to get totally exhausted and start praying the end is in sight. The end of the trail, that is. It’s on the last really large outcropping that MR, a little ahead of us, spies the tower. I literally shouted out, “Praise God!” when I saw the tower. We made it. Then we stepped through an alternate universe.
From the green, lush forests we stepped into tourist haven. We almost get hit by all the motorcycles and we have to fight the Asian tour group to get to the tower. We’re reading the inscription over the door when MR has the brilliant idea to climb to the top. I almost knocked him down- if I could have gotten to him- my legs were shaking by this point. So up we go. And in climbing to the top, we debunked a popular urban legend- there is no soda machine at the top of the tower. Zombiegirl at this point refuses to go any further. She tells us she’ll get a ride down- she’s not going another step. She picks out the Harley dude she’s going to ride down with. She’s not kidding. We find a soda machine and rehydrate her, and although she’s still cranky, she agrees to complete the hike back to the car. 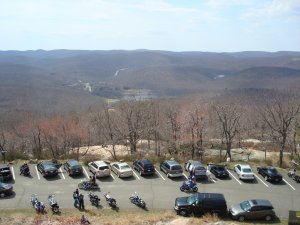 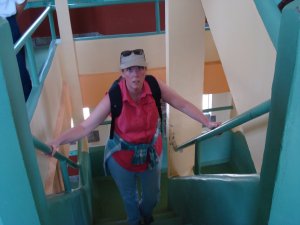 After playing the tourists, and taking pictures (some of dogs in hats) we start our way down. We find a huge outcropping with the AT carved into it, so we know we’re heading the right way. And it’s down. which isn’t really a good thing- it’s hard to go down a very steep hill without something to hold on to. We hit another road and followed that for a awhile and saw a pair of nesting hawks. And the parking lot. It’s in sight!

The next part of the trail was surreal. It’s about four o’clock now, and we’re still going downhill. It’s very rocky, and very steep. And very full of tourists. Going up! In saris, heels, dresses, sandals…don’t these people realize that they’re going to have to go back down? We’re falling all over the place in sneakers and boots. These people are nuts! They’re going out for a stroll- uphill. Morons.
We finally reach the portion of the trail we veered off onto the SBM- it really is poorly marked- and we’re in the final stretch. Z-girl is happy we’re getting closer to air conditioning, I’m happy I’m on level ground. Going downhill slid my feet to the front of my sneakers and now I have two happy blisters on my toes. We cross the great lawn where tons of people are flying kites, picnicking and playing ball. Nothing felt that good that day than sitting in the car and taking off my shoes and socks. I sound like I was complaining the whole time but really I had fun.
So how would I rate the Bear Mountain portion of the AT? Medium to hard. It was probably not the best idea to do this portion first. But doing it was an accomplishment and my theory is the rest can’t be that bad.

Once soccer is over, we’ll start back on the trail. MR found some nice Long Island trails he wants to try. And Dad gave me some awesome hiking poles I want to try out! Stay tuned for hike #2!